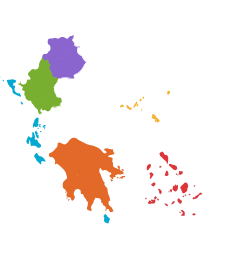 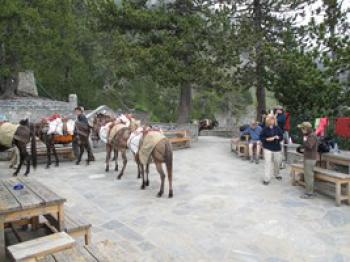 Old monasteries of Meteora and fascinating cliffs, spirit of ancient times coming through legends and stories, and beautiful hikes at Zeus home Mountain Olympus through outstanding areas of wild nature and picturesque villages on the way. Take your backpack, a free spirit for adventures and join our program.

Day 1-3: Arrival/ Meteora-Kastraki. Group's arrival in the airport and direct transportation by bus to hotel in Kastraki village. The area of Meteora is considered to be a geological phenomenon, unique in the Balkans with the huge rock formation that were shaped in the valley millions of years ago. During our stay in the area we shall hike around cliff-top monasteries and have a glimpse at hermit?s life on these rocks when rock climbing was considered a spiritual experience.

We will visit some of the most interesting monasteries of 13th - 15th century like St.Nikolas Anapafsas, Varlaam and Great Meteoron Metamorfosis with marvelous frescoes and byzantine treasures.

Day 4-7: Meteora-Litochoro-Mt Olympus: Transfer to Litochoro at the foothills of Mt.Olympus. The hike to Enipeas Gorge is the first of a series of hikes in Mt.Olympus area that entail ascent to the refuge of Spilios Agapitos and the impressive conquest of the most famous top of the mountain of Gods, Olympus to a limit of 2.918 meters. We return in Litochoro were we spend our last night of the tour.

The impressive cliff-top monasteries of Meteora

Hiking in the mountain of Gods

Ascent the highest summit of Greece