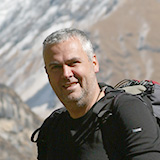 Kostantinos was born in Ioannina and from a young age he found interest in climbing and sea sports. He is a former sea diving instructor in the Greek Navy with a profound love for all sports that require a close contact with the nature's forces. Konstantinos obtained his Guide's diploma in France. After having led many high mountain treks in the world, he decided years ago that it was time to create Greece's first active holiday company. 28 Years later his passion for the outdoor keep him on the field leading tours and discovering new and exciting trips in the Greek mountain areas for his clients. 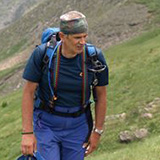 Michel was born in Ioannina and obtained his degree in Medicine in Padova, Italy. His love for the mountains won him over and besides practicing medicine as a surgeon, he is a professional mountain guide, member of the UIAGM, who has climbed and trekked in most of world's highest mountain ranges.

Since 1994 he runs the First Aid station in Vasilitsa ski center and supervises the safety on the slopes. 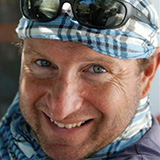 Karolos Merlin or Charles how he's English friends call him was born in Austria 40 years ago from an Austrian mother and a Greek father of English origin. He has lived in Austria until the age of 7 and then moved back to Greece to live here ever since. Only a few years he was moving with he's wife back and forward to Germany until they decided to settle in Athens and Tinos on the Cyclades with their daughters.

He has been a guide to the Greek countryside for over 15 years and spends most of the season trekking and attending two holiday homes in Tinos. Native speaking combining two mentalities, middle European and Mediterranean, he works his way through the Hellenic culture and everday life. Among other, his interests are Mountain Biking, Photography, Digital Mapping and Graphic Arts. 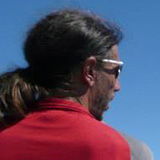 Makis works as a mountain guide the past 6 years leading trekking groups in both Pindos and Olympus area. He has graduated from the school of mountain guides in Saltzburg (Salzburger Bergfuehrer Verband) and has cooperated with leading tour operators in Greece and abroad. He speaks English and German and among his interests are photography, history and mountain sports.

He began to work professionally with mountain activities from 1999 working as a ski instructor in children's academies of Thessaloniki Mountain Club in Seli ski center. In 2001 he attended the Saltzburg ski school for instructors in Kaprun, Austria working in the same time on the slopes of Obertauern. He reached the second level as a Landeslehrer and from 2004 and onwards he lives and works as a ski instructor in Vasilitsa ski center. 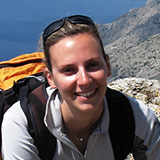 Katerina was born in Ioannina in Epirus region. She attended 2 years courses in the American College of Greece, Deree and continued her studies in the University of Wales, Swansea where she graduated from the Department of Social Studies.

Her love for nature and culture determined her career choice and since 2005 she works in Robinson Expeditions on the logistics and materialization of the programs offered.